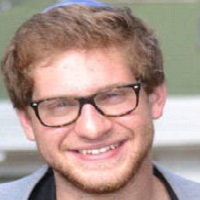 Last semester, 63 Ramah alumni attended a Ramah Shabbat Dinner at University of Michigan Hillel, with representatives from each one of our overnight camps.

“Michigan boasts having the most Ramah alumni of any school, but that accomplishment is difficult to visualize on such a large campus,” said Ramah Canada tzevet member and U of M senior Shira Wolf. “Dinner on Friday night was one of the first times I was able to truly see how many Ramahniks there are at Michigan, and getting to welcome in Shabbat with them was a great experience.”

Before dinner, Shira led Kabbalat Shabbat at Hillel’s egalitarian minyan, where Ramah is often well represented. Shira was also the Ramah Canada “team captain” for the event. In preparation for the dinner, “team captains,” or representatives from each Ramah camp, were instrumental in shaping the vision of this event and in spreading the word to Michigan students who attended their home camp.

After the minyan ended, we all helped rearrange the chairs, to transform our davening space into a private dining room. When we were ready to begin, we sang Shalom Aleichem, over sixty voices strong. We had 15 from Ramah Wisconsin, 9 from Berkshires, 8 from Darom, 8 from Canada, and tzevet members from California, Palmer, Poconos, Nyack, and Rockies as well.

“The Ramah Shabbat dinner was an amazing way of bringing the Ramah community together on Michigan’s campus,” said Danny Kahn, a U of M sophomore, Wisconsin tzevet member, and major organizer of the event. “Everyone was happy to reunite with their camp friends and to meet new Ramahniks. After helping to organize the dinner, seeing friends from all different camps come together as a unified group at Hillel was both rewarding and exciting for me. I was watching Ramah traditions and ruach come to life.”

Communal moments like humming niggunim after hand-washing and singing birkat hamazon resonated with the students.

“It was refreshing to be with people who share my values and customs,” said Josh Flink, a U of M sophomore and Wisconsin tzevet member. “Eating, schmoozing, even saying birkat hamazon in unison made the Ramah presence unique and meaningful. Even though we all came from different places, I loved being with people who could relate to me in that special Ramah way.”

Students were enthusiastic about the possibility of maintaining a sense of Ramah community at Michigan with future Shabbat dinners or other Reshet events. For the guests at our Shabbat dinner table, the Ramah experience expanded beyond the two months of summer, and transitioned from camp to campus.

Jared Skoff grew up in Cleveland Heights and graduated this past year from Washington University in St. Louis with a degree in Jewish Studies and Writing. During his time at Wash U, Jared served as jazz director of the campus radio station, revived the Yiddish department, and played harmonica in both blues and klezmer bands. He spent the past five summers as a counselor at Ramah camps in Canada and Wisconsin and taught for the past six years at synagogue religious schools in the Cleveland and St. Louis areas.