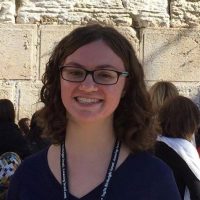 Madison attended Camp Ramah in Canada as a camper for seven years and then returned on staff for one year as the Creative Writing Instructor and Editor of the Camp newspaper, Kol Ramah. Originally from Cleveland, Ohio, she is a sophomore at Binghamton University where she is double majoring in Judaic Studies with a concentration in Jewish Non-Profit Organizations, and English with a concentration in Rhetoric. Madison is an active member of Hillel at Binghamton, where she serves as the Director of Education.

On the Saturday afternoon during the recent winter Ramah Birthright Trip, we participated in an activity where different questions were asked and we had to stand either at agree, disagree, or neutral. One question asked us if we feel more Jewish in Israel or North America. While at the time I chose one of the answers, I realized upon return home that my true answer wasn’t one of the given options. I feel more Jewish when I am with fellow Ramahniks, regardless of the physical location.

At any point during the year I can be found talking about or reminiscing on Ramah memories. Yet, more often than not, the people I speak to about Ramah don’t really care to hear about Ramah, and can’t understand what I’m talking about. When I first learned that I could go on Birthright with Ramah, I instantly knew that was the trip I wanted to go on, and that I would convince my Ramah friends to go on it with me. There is something about the word Ramah that makes anything so much better.

I was not sure what to expect of Birthright. Would I like a 10 day touristy trip similar to a touristy trip I had taken to Israel in 8th grade with Schechter? Would I feel comfortable with the atmosphere? The Ramah trip exceeded any expectations I did or did not have. There were many parts of the trip that were meaningful for me, such as touring Yad Vashem for my first time, and exploring replicas of sanctuaries in India, Italy, and the Caribbean in The Israel Museum. However, it was going with Ramah which enhanced this trip in a way that I could never experience with a different group of people.

When I am with fellow Ramah people, I feel at home. I can talk about Ramah and people will ecstatically join in—they love talking about Ramah as much as I do. I can start singing Hebrew songs, or dancing to Golden Boy, and Ramah people will join in instantly—regardless of which Ramah camp was attended, all Ramah campers have in common a passion and love for Ramah. We have a connection that is built between all Ramah people, no matter which Ramah camp was our home base.

What makes my Ramah friends different then my other friends, is that my Ramah friends are energetic about prayer, about dialogue, about songs, about religion. I have never been as content in a religious environment as I am when I am with Ramah. I will never forget the Shabbat I spent at Yearim hotel, right outside Jerusalem during this Birthright trip. Although spent completely in a hotel, it is a Shabbat filled with conversations around Jewish pluralism and music and a Shabbat that I will always cherish and strive to replicate. On Friday night, after a Ramah style Kabbalat Shabbat, and following Shabbat dinner, a group of ten of us congregated around one of the tables in the hotel dining hall and sang Birkat Hamazon with as much ruach as an entire camp. We sang loud and clear, no one bothered by the fact that we were in a public hotel dining hall where others were eating. No one questioned us, or looked at us in a funny way. We high fived and banged the table at the appropriate moments that Ramah had engrained in us. We carried on with the Shabbas joy by singing Shabbat songs. Saturday afternoon after lunch we once again did the same, this time after Birkat singing slow songs as we approached the end of Shabbas. I never felt so much happiness, so much thrill and comfort and calmness rush through my body all at once, as I did sitting around that table with some of my closest life time friends from Camp Ramah in Canada, and some of my new closest friends I had made from other Ramah’s, just days before, on the Birthright trip. Ramah brings people together to share feelings that could take years for non Ramahniks to ever grasp.

There is no question in my mind that when I feel most Jewish, I am with other people from Ramah who share the same exuberant, passionate drive for Judaism as I do. It doesn’t matter where in the world I am—at home in Cleveland, at camp in Canada, on a trip in Israel, what matters is the community I’m with. When I’m with Ramah, I am open and Jewish the way I want to be. I am so thankful to have had the opportunity to confirm this once more by going on a trip to Israel with Ramahniks. Tov li B’Machaneh Ramah. But really, Tov Li, when I am with those who connect with me on a Ramah level.