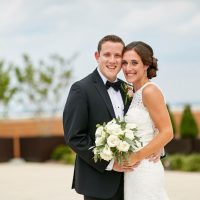 Going back a number of years, Mike and Julia met at Ramah Darom when they were 13 years old and became great friends throughout their summers as campers. They started dating when they were 18 – Mike was beginning his freshman year at University of Central Florida and Julia was starting her sophomore year at Indiana University. Young and in love, they maintained a long-distance relationship for the next three and a half years and looked forward to the visits in between the summers they spent together at camp. After graduating from their respective schools, they began the next chapter of their lives in NYC, where Mike started law school at Cardozo.

The proposal story begins in March 2016. Mike, not knowing exactly when he was going to propose, went on a business trip to Louisville. The only catch is that Julia truly thought Mike’s work sent him to Louisville with his boss to meet with one of their clients. To her surprise, the only business Mike had in Louisville was to get her parents’ blessing to marry her.

Fast-forward 8 months to November 2016 when Mike sneakily invited his and Julia’s parents to New York for the weekend. This weekend was special because it was the first Friday of the month, which meant Julia and Mike were spending their evening with camp friends at Ramah Shabbat. What better way to propose, than to make this come full circle with Ramah?

Mike left work early that Friday and had been practicing kneeling down in the mirror all day. They got to services and Julia had no idea what was in store. After the conclusion of the service, the leader of Ramah Shabbat made announcements and explained that they were going to be starting a new tradition by inviting one Ramahnik up each month from a different camp around the country to share his or her favorite camp memories. Side note, there are usually around 40 people in attendance, but luckily for Mike, it’s a full house this evening. “Coincidently”, he was chosen this month, and he began to explain that he couldn’t share his camp memories without his camp girlfriend up to help him, so he invited Julia to join him. At this point, Mike looked at Julia and expressed that when thinking of his camp memories, they all were about her. He thinks about the first time they met at camp, even though they fight about where that was. He thinks about the first time he told her he loved her during Havdallah at camp. He expressed how every moment he spends with her and has spent with her over the past 6 ½ years are his camp memories; and how all he wants to do is continue to make these camp memories with her for the rest of his life.

And the rest is history, folks. Julia’s emotions took her a while to get out the word “yes” or maybe Mike just couldn’t hear her because the entire congregation was dancing and singing songs at the top of their lungs. But finally, #MikeGotTheJul. They got married in Louisville, Kentucky on August 20th, 2017 surrounded by so many of their lifelong Ramah friends.