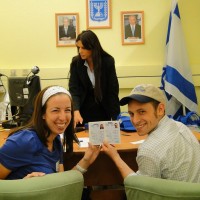 Melody Coven is a Canada Ramahnik who made aliyah in 2013. She wrote this about her journey to making aliyah:

One place to start would be in 2006, when I studied in Israel for a semester in high school on a program called Tichon Ramah Yerushalayim. It was then, as a fifteen year old, that I knew I wanted to make Aliyah. I’m sure this sounds cliche, but as a Jew, being exposed to a country where I could finally live as a member of the majority really moved me. The more I studied Jewish history, the more I grasped the truly spectacular reality that Israel exists in the world today and the more than I yearned to be a part of writing that history. That yearning has existed in me every day since I spent that semester in Israel, and the desire to be part of Israel- building it, improving it, and sharing in its triumphs as well as struggles-has finally culminated in my becoming a citizen in the land I so eagerly wanted to call home for the past 8 years.

Melody wrote the following about meeting her husband and her Jewish experiences at Ramah:

I was blessed to meet my husband, Avi, on the Nativ gap year program straight out of high school, and two weeks before we made our big move to Israel, we made the even bigger commitment of getting married. In addition to the transformative experience I had on the TRY program, I have been deeply influenced, in more ways than is possible to list, by my many years at Camp Ramah in Canada. Without the Jewish education I received there (especially having been a public school student) and the immense pride in Jewish identity that is contagious at Ramah, there’s no chance I would have followed the path I did.