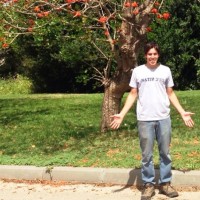 This article, “From Nativ to Aliyah”, originally appeared in The Jerusalem Post on June 7, 2015.

When Sam Eisenberg was 17, he came to Israel for the summer to travel the land and volunteer. He’d recently become interested in Israel as a participant in Write On for Israel, an Israel advocacy program for high school students. In their seminars, Sam read about Israeli current events and politics, and later, on the organization’s trip to Israel, he met with Israeli journalists and politicians.

“I felt like I was putting everything that we’d been studying into practice,” said Sam. “As I began exploring the land, I began to identify with Israel more and more.”

One Friday night, Sam attended a Shabbat meal at the apartment of his counselor from Camp Ramah Wisconsin. His counselor had since made Aliyah and had joined the army. After kiddush, he suggested that Sam consider doing a gap year in Israel.

“He saw that I cared about Israel and that I was having an amazing time here,” Sam said. “He told me, ‘You’ll go to college afterwards, but you’ll never be able to do this again.’”

After returning from Israel, Sam applied to Nativ, the Conservative Movement’s College Leadership Program in Israel. Then, a few months after graduating from high school, Sam flew to Israel and began his new life in Jerusalem.

As a student at Hebrew University’s International School, Sam took courses in Israeli politics, Israeli economics, and the Holocaust. He also enrolled in an intensive Hebrew Ulpan. Israel became another classroom for Sam, who loved spending his free time exploring the country with friends. On long bus rides, Sam would stare out the window, watching Israel’s ever-changing landscape pass beside him. “I felt connected to the land in Israel in a way that I hadn’t felt in other places,” he said.

Once his first semester ended, Sam traveled to Poland with Nativ, and bore witness to the concentration camps. “Seeing how important the Jewish homeland was, especially after the Holocaust, made me realize how lucky I was to live in Israel.”

After returning to Israel, Sam relocated to Kfar Hasidim Youth Village, a home for disadvantaged and at-risk youth. There he spent his days volunteering in a metal shop, which serves as a trade school for the youth, so that they can kickstart their careers and become self-sufficient after the army.

One day, Sam was working with Aviv, a 14-year-old in the youth village, when he asked Sam why he would ever want to volunteer in Kfar Hasidim instead of making money somewhere else.

The more time Sam spent in Israel, the more he realized he didn’t want to leave. The day when he planned to start his Garin Tzbar application, which gives Olim who are joining the army a support network and home, his friends walked into the computer room. Sam had previously mentioned his interest in joining the army, but they didn’t realize how serious he had been. The three of them sat down and had a serious discussion about Sam’s motivations. They expressed their support and Sam completed the entire application that day.

“After falling in love with Israel and realizing that I identify with the country, I knew I couldn’t just take the typical path and go to college right then,” said Sam. “Now was the time for me to serve the country.”

Sam’s parents understood Sam’s passion. His father, too, had been a lone soldier in Israel in his early twenties.

Though he has a slight hearing loss, Sam was thrilled to learn that it won’t affect his army service. He looks forward to being a combat soldier. “My goal is to get into the best unit I can get into and to do the best I can do,” he said.