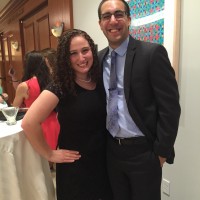 Sarah and Ben actually met in 2004, when they were both campers but weren’t really friends until they re-met on Tzevet Nitzanim in 2009.

They served on Va’ad Shabbat together, and through working together and carpooling on days off, became friends. After camp, they began to talk more during the year, and started dating in March 2010. They worked at camp together for the next few summers, and now continue to visit camp during the summers now that they are not working there.

This summer Ben and Sarah came to camp for the Shabbat after their wedding, and were able to do their last two sheva brachot in the place where they met!