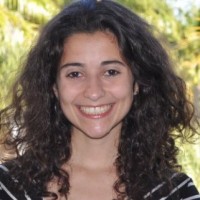 Rabbi Avi Killip has found homes at Camp Ramah New England, Ramah Darom, and Ramah Wisconsin. She currently serves as Director of Project Zug and Alumni Affairs at Mechon Hadar. Avi was ordained from Hebrew College’s pluralistic Rabbinical School in Boston. She is a Wexner Graduate Fellow and holds a Bachelors and Masters from Brandeis University in Jewish Studies and Women & Gender Studies. Avi has worked as a teacher and Jewish professional in two synagogues, an independent minyan, a mikveh, and a yeshiva.

When I was growing up, I thought that God lived at Camp Ramah. Ramah was my first experience praying every morning, and later three times a day, and in the quiet moments of the Amidah, I discovered that I could talk to God. And God was also there in the loud, banging, joyful singing of Friday night. And there in the hike to the waterfall. And in the late-night conversations with bunkmates. It was so clear to me that God– who could probably choose any home– would choose, and did choose, Camp Ramah.

On my first day of rabbinical school at Hebrew College, we were each instructed to bring an object that helped show something about who we were. I brought a “mincha card” that I had long ago stolen (permanently borrowed?) from Ramah Darom. I introduced myself as a Ramanik. It was my time as a Ramah camper that taught me to love God and Judaism, and that love is what led me to become a rabbi.

I am proud to work now at Mechon Hadar as the Director of Project Zug, is an online havruta learning platform that allows people to connect with each other, and Jewish learning, from their homes.