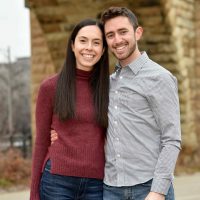 It was the summer of 2013, Eitan and Lucy were Halutzim counselors for the second half of the summer. It wasn’t until the last weekend of camp that Eitan and Lucy realized they wanted to be more than friends. Unfortunately, they went their separate ways after the summer ended.

Four years later Eitan and Lucy were both living in Chicago and bumped into each other a few times. Gradually, they progressed from awkward waves across the bar to actually catching up. The two immediately picked up where they left off and got married 4 years later.