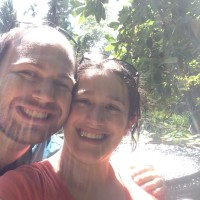 We met in the kitchen at Ramah Nyack; Gabe was the mashgiah and Nina was a CIT in Kochavim. We don’t think we actually ever spoke to each other, or had any conscious feelings, but we remember seeing each other.

Nina even remembers Gabe smiling at her once. Nina commuted to camp each day and on the one Shabbat she spent in camp that summer, she went to and enjoyed a shiur that Gabe happened to be leading. Little did we know that we’d be reunited at college (Barnard/JTS for her, Columbia/JTS for him), start dating, and eventually get married with former campers as well as former and current staff from the Ramah camps in attendance!

Between the two of us, we count 8 summers spent at Nyack as campers and 6 years as staff. They were formative, life-changing years indeed!