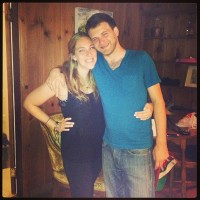 We overlapped in camp a number of years but we never really talked to each other. I always knew “Smitty” but he had no clue who I was. He was my sister’s (Gesher 2009) Rosh Gesher, and friends with my co-counselor and best friend Alyssa Frank (Gesher 2005).

During the summer of 2006, I always wanted to talk to him, he was a Gesher counselor and I was JC in Bogrim, (Alyssa can tell you that I always asked about him) but we never ended up saying a word to each other.

Four years later, after many run-ins without saying a word, at the Berkshires Thanksgiving reunion in 2010, we said hi and he asked my friend Melanie Kimmelman (Gesher 2004) for my number. After a lot of back and forth and different camp friends playing middle men, we hung out at another camp friend’s birthday. After 2 summers of dating while Josh worked at camp, we got engaged in Kent a few miles from camp where we spent a lot of time during “days off”.