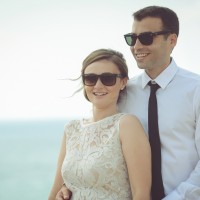 Julia and Omer reconnected in November after camp when Omer returned to Israel from a trip in Central America. They soon realized that they were practically neighbors, as Julia, who was studying at the IDC Herzliya at the time was only 10 minutes away from Omer’s hometown of Ramat Hasharon. They began dating and returned together to camp in 2010.

In July 2015, the couple got married surrounded by many camp friends. In August, they moved to Washington D.C. to start their graduate studies.