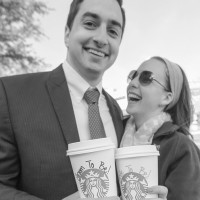 Since her first year as a camper in the year 2000, Rosi has been in love with Ramah Darom, and always dreamed of meeting her future husband at camp. Rosi (Gesher ’07) and Steven (Gesher ’08) first met in the summer of 2010, when they were both on Tzevet Kochavim at Ramah Darom (although somehow they have a picture together from 2006 when they were campers.) Rosi was on Tzevet Mayim (lifeguard) and Steven was the soccer coach.

Rosi and Steven felt the instant connection as soon as they met, even though her best friend Wendy (a Darom alumni) said he was totally not her type. Luckily, another friend, Julia (also a Darom alumni) thought otherwise and took it upon herself to play matchmaker. It did not take long for the Kochavim campers to notice the connection between Rosi and Steven (although these staff members really tried to hide it!). Whether it was a date at the Cupboard Café (a delicious restaurant in Clayton, Georgia) or a tubing trip along the Ocoee River, their feelings for each other grew stronger each day throughout the summer. With a second summer on staff planned for 2011, they both looked forward to more time together at Ramah Darom.

As the summer ended, a four-year long distance relationship started from the University of Central Florida in Orlando to Florida State University in Tallahassee. Even though the miles on their cars grew, nothing could stop them from visiting each other throughout their college years. After graduation, it was finally time to move to the same city, Jacksonville, Florida, where Steven works at Everbank and Rosi is finishing her Masters Degree in Educational Leadership.

Every Sunday, Rosi and Steven have a tradition to walk to the Starbucks in their neighborhood and sit outside enjoying their time together. It is what they look forward to all week and is always a fabulous way to end their weekend. On February 15, 2015, they embarked on their walk to Starbucks: Rosi thinking it was just a typical Sunday and Steven with a specific plan in mind. Steven left to use the restroom and Rosi wondered what was taking him so long! Then Steven, now dressed in a suit, again approached Rosi sitting patiently drinking her coffee, he got down on one knee and Rosi said “yes!” When they went to their apartment rooftop to celebrate, they were greeted by two sets of parents (Rosi’s father is a Ramah alumni), Steven’s sister Pamela, Rosi’s brother Seth (another Darom alumni) and Rosi’s best friend Wendy, who turned out to be very wrong.

Rosi and Steven are so excited to spend the rest of their lives together. They would like to thank their parents for sending them to Ramah so many years ago. Without this experience, it would have taken them a lot longer to find each other! They look forward to one day being able to send their children to Ramah for the life changing experiences that can only be found at camp Ramah Darom.