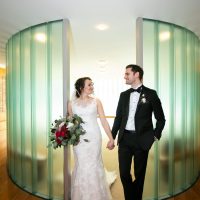 Ariel and Isaac grew up together in the same community and at Schechter and became close friends when high school began. Ariel’s mother and Isaac’s father were on the same Seminar bus in 1976, and Isaac started attending Ramah Wisconsin as a camper in 2006. Ariel joined him in 2008, where they continued to grow their friendship and shared love of Jewish community. They were best friends for many years before they started dating and eventually got engaged and married. Ariel and Isaac currently live in New York, where Ariel works for National Ramah! Ramah has played a huge role in both of their lives and has helped deepen the connection between them.