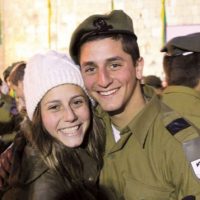 Sarah Drill Fainshtain and her brother Josh Drill are both Ramah Nyack staff and camper alumni who have made aliyah. Sarah is currently the Resource Development Manager for Wings, a joint initiative between The Jewish Agency and the Merage Foundations that provides a variety of support services to lone soldiers after they complete their army service.

The following article, “A Dream Come True,” was originally published in The New Jersey Jewish Standard on May 26, 2015.

Sarah Drill knew she wanted to make aliyah, and she knew that she would be a lone soldier, but she never thought that her IDF career would include a stint as a sniper instructor.

The IDF, though, tests both its recruits and its draftees thoroughly. It figures out new soldiers’ talents, asks them their interests, and does its best to match them. Ms. Drill, it turns out, can combine intense focus and extreme coordination with the ability to pass that skill on to others.

Who could have known?

Ms. Drill was able to parlay that experience, along with the rest of her knowledge, talents, and worldview, into a job that uses her talents, in Israel, through a program called Wings.

Last month, Ms. Drill, the daughter of the Orangetown Jewish Center’s Rabbi Paula Mack Drill, came to Rockland County and talked to an audience of about 80 people about that 10-year-old but still inadequately known program.

Sarah Drill and her youngest brother, Josh, stand together at Josh’s swearing-in ceremony at the Kotel in Jerusalem.

“Wings helps young people from before they arrive in Israel through two years after they are released from the IDF,” Ms. Drill said. “That’s what makes it unique.

“About three months before they are released, we put them in a five-day workshop — run, of course, in coordination with the IDF — and the workshop starts preparing them for what it means to become a civilian in Israel.”

Part of the workshop’s function is to talk to the group about the benefits to which they are entitled as former soldiers, as new immigrants, and as lone soldiers, including scholarships, and the tax implications of any decisions they make, Ms. Drill said. Also, “each lone soldier is matched with a professional career counselor, who is also a psychologist. You, as the lone soldier, meet with the career counselor as many times as you want to, for up to two years.”

The career counselors also help the lone soldiers write resumes; even before that, they help sharpen their charges’ ideas about what they’d like to do once they’re out of the army. It’s entirely individualized. “You can’t make one plan and expect it to work for everyone,” Ms. Drill said.

The career counselors are not volunteers. “Wings pays for the professionals; the lone soldiers get all these services for free,” Ms. Drill said. On International Women’s Day, Wings had a program for female lone soldiers. Sarah Drill is in the front row.

“Overall, in both the before and after programs, we have helped over 6,000 lone soldiers up to this point,” Ms. Drill said. “It’s usually about 800 lone soldiers a year.”

Wings is a program of the Jewish Agency for Israel and the David and Laura Merage Foundation, Ms. Drill said. The Merages, both Iranian Jews, came to the United States separately, when they were young, almost half a century ago. “They really understand and feel for lone soldiers, what it feels like to come to a new country, when it’s not your language and it’s not your culture,” she said. “He loves Israel, and wants to be part of having these young people stay in Israel.

“The Jewish Agency recognized the high potential in the young people coming to Israel and serving as lone soldiers,” she continued. “They looked at statistics, and saw that about 95 percent of them have potential for higher academic studies. If you compare them to the regular Israeli population, that is a very high percentage.

“But the Jewish Agency — and particularly Mira Kedar, who worked there — noticed a pattern, with people going back to where they had come from, because they weren’t able to find their whole potential in Israel. They wanted help. Mira Kedar recognized the issue, and she created the Wings pilot program, along with the Merage Foundation.”

Lone soldiers come from all over the world; most right out of high school, at 18 or 19, Ms. Drill said. When they first arrive in Israel, most do not speak fluent Hebrew, so the services Wings offers them are in their native tongues. The most frequently offered languages are English, Spanish, French, and Russian. By the time they are ready to write their resumes, though, they are ready to undertake that task in Hebrew.

Her own story is somewhat anomalous, she added, because she joined the IDF after she graduated from Muhlenberg University. “I majored in English, with minors in Jewish studies and photography,” she said. “I had a really great experience at Muhlenberg. I knew even before I started college that I wanted to make aliyah, but it was something that came to me after I was accepted there, so I decided to continue on my path. I said that if after four years I still wanted to make aliyah, I would do it then.” She still wanted it. She made aliyah right after college, in 2012.

Once she and the IDF agreed that she’d become a sniper instructor, she had three more months of sniper training. “You have to be certified as a sniper before you can be certified as a sniper instructor,” she said. “It is intense. It takes a lot of focus. A lot of patience.” And, of course, a good eye and a steady hand. It was a shock. She’d come from a gun-free environment. “My mother joked that she’d always confiscated water guns after birthday parties,” Ms. Drill said. “I loved it. I found it to be really meaningful service.”

Ms. Drill was in the IDF in the summer of 2014, when Operation Protective Edge took soldiers into Gaza. She worked on Tze’elim, the Israeli training base in the Negev that is the country’s largest. “Essentially, every soldier who went into Gaza came through there,” she said. “We were able to give them that last lesson before they went into Gaza. We gave them everything we had.”

Her IDF service ended just as Protective Edge did. “I had about a month left, and I panicked,” she said. “I wondered, what am I going to do? I realized that there were people who wanted to make sure that I would stay in Israel, so I went to the Wings workshop, and I came out with a resume.

“I had a resume from college, a good one, in English, so I thought I could just translate it into Hebrew, but it’s not entirely the same thing. My Hebrew one is definitely shorter, and a very important piece of the workshop was having them show me how to use my army service on the resume.” The Orangetown Jewish Center’s senior rabbi, Craig Scheff, performed the wedding ceremony for Sarah Drill and Sagi Fainshtain, shown here. This week, they will have another wedding ceremony in Israel.

Ms. Drill moved to Budapest with her fiancé, an Israeli whom she met while they were both in the army. “He’s a student, studying electrical engineering in Tel Aviv,” she said. When they returned, she applied for jobs, using the resume she’d worked on with Wings. She knew she wanted to “have a job that made me feel good at the end of the day,” she said. Coincidentally, that job ended up being with Wings. “What’s really kind of cool is that I am about to look out for the future of lone soldiers — and my youngest brother, Josh, is a lone soldier right now.

“That’s a big motivation for me.”

Ms. Drill came home in April, and therefore was able to talk about Wings at the Orangetown Jewish Center, because she was celebrating the first of two wedding ceremonies. She and her now-husband, Sagi Fainshtain, got married last month, and will remarry in Israel next week.

Her parents, Richard and Rabbi Paula Mack Drill, are in Israel for the wedding — and also to celebrate their own 31st anniversary.

“Two things were very clear to us from the time Sarah was in high school,” Rabbi Drill said. “Her Zionism was so powerful that she was likely to end up living in Israel, and her sense of purpose and drive was so strong that she would one day be doing something important for Israel. All of that has come true in her work for Wings for Lone Soldiers.

“We have been proud of Sarah throughout her many trips to Israel: her high school trip, three different JNF alternative spring breaks, her semester abroad at Haifa University, and her ultimate aliyah. Throughout it all, the common thread has been that she wanted to become part of Israeli society in a meaningful way. This goal was clear in her choice of army service as a sniper instructor. And now it is clear in her chosen work for Wings.

“During her most recent trip back to the States — so that Rabbi Scheff could officiate at her marriage to Sagi Fainshtain — Sarah spent a morning speaking at our synagogue, Orangetown Jewish Center.” (That’s Rabbi Craig Scheff, Orangetown’s senior rabbi.)

“In that amazing hour, I saw my daughter as a professional woman, speaking with passion and clarity about her work on behalf of lone soldiers, including her brother Joshua.

“For me, it was pretty much a dream come true!”