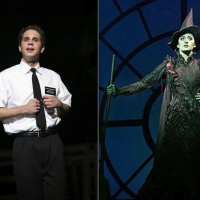 From the stages of Ramah to the lights of the “Great White Way,” two Ramah alumni will perform on Broadway starting this winter. Our first star, Ramah Canada alumna Caissie Levy, will shine as Fantine in the revival of Les Miserables. Caissie previously starred as Elphaba in the Broadway production of Wicked, Penny in Hairspray, and Molly in Ghost. She has also performed the role of Maureen in the national production of Rent.

Our second Broadway-bound alumnus, Ramah California’s very own Ben Platt, will star as Elder Cunningham in The Book of Mormon. Ben has performed the role of Elder Cunningham in the Chicago production of Book of Mormon, and his previous theater work includes  performing in the national production of Caroline, or Change, and the Columbia Musical Theater Society’s production of Hair. Ben can also be seen in the hit film, Pitch Perfect, in the scene-stealing role of Benji. Stay tuned for more information regarding how you can see Caissie and Ben on stage! Ben Platt in Book of Mormon