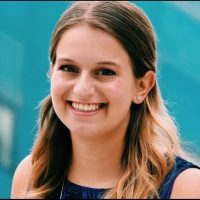 Valerie “Val” Weisler is a Shorashim counselor at Ramah Nyack. She was a camper there for six summers. She is also the founder/CEO of The Validation Project, a global movement that links more than 6,000 youth worldwide to mentors and unique social justice opportunities. Val was recently appointed as the newest ambassador for the U.S Department of State. She can be found answering emails on the White House porch and dancing with her campers on the way to lunch. Val is currently a freshman at Muhlenberg College, where she is in the pre-law program, majoring in international studies and education.

I’ve been at Ramah Nyack since I was in 3rd grade. The rocky cobblestone pathway was my road to the place I call home and the gesher was a magical transportation between one side of it and the other. When we’d drive past camp during the year, I’d make my mom turn off the music and I’d stare out the window, itching for an ounce of camp to hold onto until the next summer rolled around.  My counselors were these incredible superheroes I set out to be from my first summer in Tzeirim to the day I clung to my staff t-shirt and graduated Bogrim.

So when I walked back on that pathway this summer, if I’m being honest, I was pretty nervous. I was put in Shorashim as a counselor for twelve girls going into first grade. On the first day, they came up to me and my co-counselors at 9AM, wide-eyed and excited as Israeli music blasted across the migrash and 500 tzevet danced in unison. I was also excited, but that before-you-get-on-the-rollercoaster feeling still took over me. I wanted so badly to give them the experience I got at Nyack, but could I? As the first weeks flew by, my fear was replaced with an overwhelming love for the gap-toothed little girls I came to know. They made me a morning person. I didn’t need a cup of styrofoam seasoned coffee from the chadar ochel to wake me up.  I was greeted every day with hugs from my campers and rambling stories of the things they had done since I had last seen them. Their enthusiasm was the same, whether it was about a new migrash song, passing the blue test in the pool or simply getting another slice of pizza. I was living in a bubble of six-year-old bliss and I prayed it wouldn’t pop.

But I started to see it. They’d run to soccer, then walk away with disdain when they saw the boys were also there. They’d pretend to be princesses and insist they had to be saved by a prince. They’d look at the post-rain mud puddles with glee, then sigh and say, “We can’t jump in them. We can’t get dirty.”

My heart tore as the bubble popped and reality struck. Before my campers had even learned to tie their shoes, they had learned that boys rule and girls drool. I wanted them to know that they were more than cute. I wanted them to know that they were powerful. As we sat down to have ice cream and talk about the day, I asked one what she wants to be when she grows up. She stopped eating her ice cream, grinned, and said, “I don’t know yet, but I’m thinking President.” She started sharing her ideas of spreading kindness and making sure everyone had what they need. Other girls chimed in. Five minutes later as we got ready to do the Shorashim cheer, we had a President, Secretary of State, engineer and a CEO (of course after making sure she could bring her dog to work). That moment sparked a popular phrase among our bunk: girl power. We’d ask to see their girl power and they’d strike a pose. When one of them passed their blue test or got a goal in soccer, they’d come running and say, “I used my girl power!” They marveled at the idea that they had this strength and it created a harmony in our bunk. Every afternoon following that day, we’d have story time as they ate their ice cream. Their stories quickly went from a princess getting saved by a prince to the girls of Shorashim G3 coming to the rescue. That’s the incredible thing about Ramah Nyack. It isn’t just a day camp for Jewish kids where they go from activity to activity for two months, bring home some art projects and maybe learn some Hebrew words. It’s this portal into a place where you learn that you’re more than a kid – that your age is not a disadvantage when it comes to tikkun olam and that you have an overwhelming power inside of you. And that power doesn’t leave you when you wave goodbye from the bus or the car at the end of the summer. It shakes up your soul and creates an unwavering domino effect into the real world. And one day, when one of my girls becomes President or a CEO or whatever they dream of being, I’m gonna grin because I got to be their counselor for their Shorashim summer.