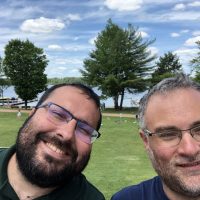 Rabbi David M. Glickman is the senior rabbi of Congregation Beth Shalom in Overland Park, Kansas.  Prior to coming to the Greater Kansas City area, he was one of the rabbis at Congregation Shearith Israel in Dallas, Texas.  Some of his favorite past jobs include: the first program director at Ramah Darom, Rosh Drama at Ramah Wisconsin, waiter at Café Magritte in Jerusalem, and barista at Espresso Royale Caffe in Ann Arbor.

My own experience as a child camper did not come from Ramah, or even Jewish camping generally.  In middle school and high school I was a serious violin and theater student.  I spent my summers at competitive music and arts camps in northern Michigan such as Blue Lake Fine Arts Camp and Interlochen Arts Camp.

I first came to Ramah as a staff member.  I had known many Ramah Wisconsin alumni as an undergraduate at University of Michigan who was involved in Hillel (which, in the early 1990’s, was basically run by Ramah alumni).  As a junior studying at Hebrew University in Jerusalem, Rabbi Soloff recruited me and my girlfriend at the time (now spouse), Annie Kanofsky, to come to the Northwoods of Wisconsin for our first summer at Ramah Wisconsin.

Though I loved my time on drama staff at Ramah Wisconsin, it was the relationships with fellow staff members that had the biggest impact.  The relationships I formed with Rabbi David Soloff, Rabbi Hillel Norry (the scholar-in-residence at the time), and Rabbi Loren Sykes showed me the power of the unique experiment in experiential education that Ramah offers.

I interviewed with Rabbi Soloff in Jerusalem at a Beit Café (coffee shop) I worked at in the Yoel Solomon neighborhood.  Though we had a nice rapport, I didn’t have much interaction with him during that summer between my junior and senior years of university.  But that fall he called me at my apartment.  There was an undergraduate at Michigan, he explained to me, who had spent all her years at Ramah but was disconnected from the Jewish community.

Rabbi Soloff asked me to host a Shabbat dinner in my Ann Arbor apartment. He wanted me to invite some Hillel friends, some of my new Ramah friends, and this former camper.  He also insisted that I send him all the receipts as he would be paying for the dinner – but not to tell the guests.

It was at Ramah that I met the young scholar-in-residence, Rabbi Hillel Norry, who carried around a small briefcase with harmonicas in every key and would play blues harmonica and guitar late into the night.  He invited me (and others who became my life-long friends) to be a part of a small group of future rabbis who talked about life experiences, enjoyed outdoor davening and breakfast cookouts together, and learned the practical nuts and bolts of the professional life that lay ahead.

Annie and I worked at Ramah Wisconsin from 1994-1996 through our undergraduate years and as we began graduate school at JTS (she at the Davidson School of Education, me at the rabbinical school). The evolution of our relationship happened alongside, and is now impossible to separate from, our deepening connection to Ramah, its power and its people. In 1996, we were engaged and were sent by National Ramah Director Rabbi Shelley Dorph, to do a reconnaissance mission in the South for a new camp that was being built.

I have memories of staying up late with Annie and Rabbi Loren Sykes who was at the time the assistant director of Ramah Wisconsin, and then named as the first director of Ramah Darom for the subsequent summer.  We dreamed about the best that we could bring from Ramah Wisconsin while also continuing to innovate and build something new.  My friendship with Rabbi Sykes continues to be one of the most influential relationships in my life.

It is impossible to minimize the impact that Ramah has made in influencing my adult life and my career in the rabbinate.  Ramah has helped me create the most important and deep friendships.

Ramah also created one of the most exciting experiences for me of being both subject and creator of a great educational experiment.  Ramah is a wonderful laboratory where you can bring together your whole Jewish self, your artistic passions, your intellectual pursuits, and your worldly values in creating a community of meaning.

One of the most rewarding aspects of our relationship with Ramah today is as Ramah parents.  Our son, Gavi, went to Ramah Darom his whole life, and our daughters, Ellie and Dani are campers at Ramah Wisconsin.

The absence of camp this year has been one of the saddest parts of the summer, but the connection with camp friends is one of the few bright lights for our children during this dark time. 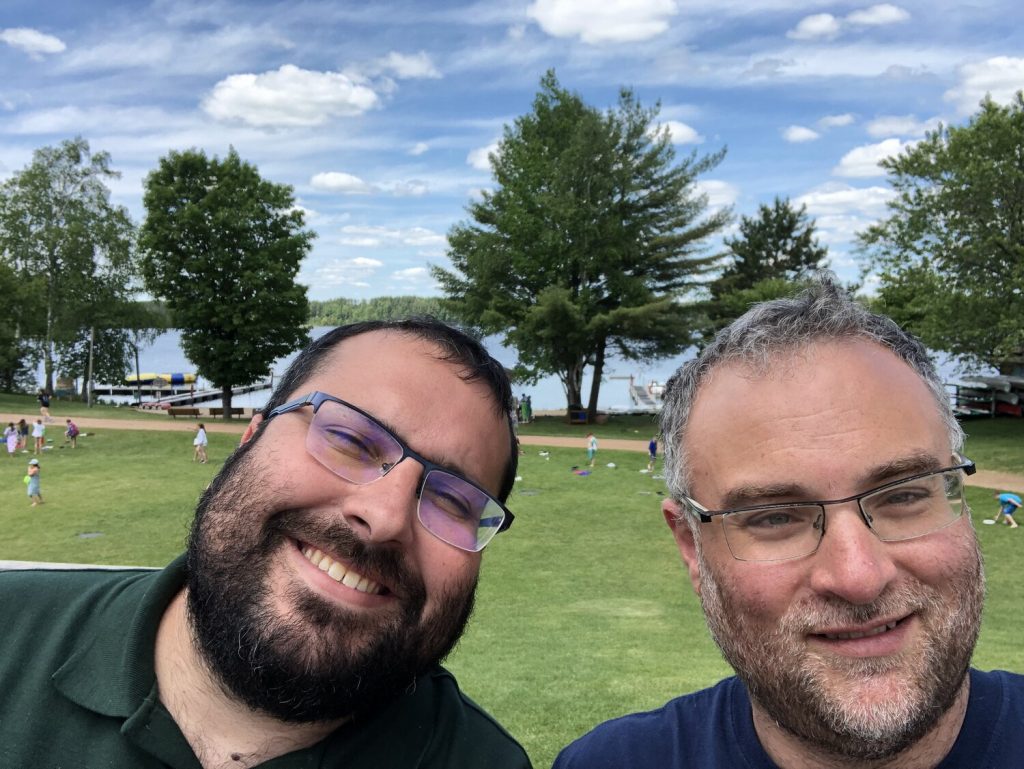