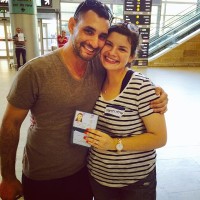 For several years, I knew that I wanted to end up living in Israel some day, but wasn’t sure how or when that dream would be realized. In May of 2012, I met an awesome Israeli guy living in Chicago named Shie and fell in love. Having grown up in Israel, he wasn’t familiar with camp traditions, and it was unclear to him why so many of my friends still called me ‘Kuppy,’ but he was definitely a keeper! A little more than a year later, we discussed building a future together in Israel, and he moved back home shortly thereafter. When he surprised me with an engagement ring before he left, we decided I would move within the year and we would plan our wedding in Israel. And before he left the States, I made sure to drive the 8 hours through Wisconsin to bring him to a very special place in my heart – Camp Ramah.

While my Aliyah was partially circumstantial, my reason for wanting to do it actually stems from a long list of influences throughout my life, one of the major ones being my years spent at Camp Ramah. Camp had a great impact on my relationship with Judaism, after so many years of learning, living, and working with many incredible Jewish leaders. After working at camp, I developed a deep respect for the traditions and the values with which I was raised, and I felt the impact of those values most when I visited Israel. I spent the past 4 years working in the field of Israel education in the Jewish non-profit world in Chicago, and I know that my passion for Jewish life can largely be attributed to camp.

At our wedding in August 2014, we were surrounded by many faces from my days at camp – including some new olim, various mishlachat members I’ve kept in touch with, and 4 of my best friends from camp who flew in to be there. Shie and I have now begun settling in to our new life in Beer Sheva, where he is a student and I am working in development at a local non-profit, the Or Movement. Life in Israel is certainly an adjustment, but I can feel the support of the Ramah network through many facets of my life here, and am incredibly proud to be living here. So it turns out, dreams can come true!