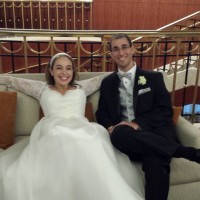 Paula first went to Berkshires as a JC in 2008 before going to Washington University in St. Louis, where she met Jeremy. Paula returned nearly every summer rising to be Rosh Edah.

Jeremy was finally persuaded to come to camp in 2013 and 2014 as Rosh Sport. They made a killer hanhallah team. Jeremy proposed to Paula in September 2014 in New York City.