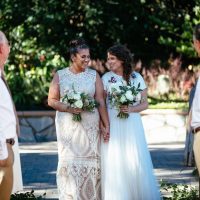 They met in 2006. Molly and Yael met at Ramah Wisconsin when Yael was in Nivonim and it was that summer that they formed a bond that would last a lifetime. After camp, Molly went to Ohio State and Yael lived in Columbus so they got to see each other often . Throughout the years, they kept in touch and corresponded constantly. Their close friendship turned to love over the years and they eventually realized that they wanted to spend the rest of their lives together. After Yael graduated from Yale, and Molly from graduate school, they both moved to Los Angeles to pursue their Hollywood dreams. In 2017, they got married and had their dream wedding surrounded by their family and friends (and so many Ramahniks). Today, they live in West Hollywood with their adorable dog Cricket. Molly works at BuzzFeed and Yael is a television writer and works for the CW.