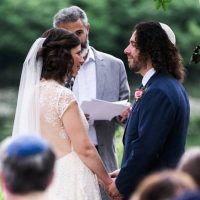 (This Q&A with Lauren and Joel first appeared on the Ramah in the Rockies blog.)

What role has Ramah in the Rockies played in your relationship?
Lauren: We met at Rockies! I was in my final summer of rabbinical school, and I hadn’t yet “done my time” working at a Ramah camp as is required of JTS rabbinical students. I showed up on the first day of senior staff weekend as a total newbie, and I remember sitting in the chadar ochel (dining tent) in a circle, watching this curly-haired guy – Joel Dworkin – who had everyone in rapt attention and laughter.

Joel: It was entirely by chance that I returned to work at Ramah in the Rockies in 2015. I had quit the previous summer after four years of building the masa (backcountry excursion) program and training the new Rosh Masa. In April, Eliav [Rabbi Eliav Bock, Director] informed me that the new trips coordinator had gone AWOL. They asked if I would take my job back for a few more months… I agreed and when staff training began I was asked to help get a few people acquainted and moved into their tents for the summer. One of them was a young woman entering her last year of rabbinical school named Lauren Henderson.

Lauren: Our first “date” – if you can call it that – was a week later, during the staff outing to Woodland Park and the local Walmart. Joel drove me and a few other staff there in his Subaru (hot date), and we bonded over picking out the perfect coffee mugs. A few nights later, the night before the campers arrived, Joel and I were hanging out in the chadar ochel as we helped set up all the tables while listening to Indigo Girls, and I thought to myself, “Hmmm… maybe there’s something going on here…”

Our relationship was pretty secret from most people in camp for the first half of the summer, which we loved, and by mid-July, we started to talk about what would happen post-camp. I went back to finish rabbinical school, Joel went back to Denver, and a year later, we both moved to Chicago where I started my job working at Mishkan Chicago and Joel went back to school. We got engaged in April 2017, and we’ll be getting married this June right after Joel graduates! Ramah in the Rockies is the place we’ve kept coming back to, where we’re excited to celebrate this summer right after we get married, and where we hope to eventually send our future kids.

What is your favorite camp memory as a couple?
Lauren: Early in the mornings before masa’ot (backcountry excursions) would go out, we would meet at the lodge. Joel would bring me an espresso that he’d made with his fancy espresso machine, and we’d sit together on the porch and watch the rest of the camp wake up. I loved those early, quiet mornings together, and I was so devastated when the building burned down – this was the memory from that building that I held onto the most.

Why is camp such a special place to fall in love?
Lauren: I honestly believe that camp is the reason why we fell in love – it was the container that made the foundation of our relationship possible. Joel and I were the best versions of ourselves at camp, personally and professionally, and we got to watch each other thrive in doing the kind of work we most enjoyed, me as a rabbi and him as a wilderness professional. I was the goofiest, silliest, no-makeup version of my rabbinic self, not having to put on a show for anyone. And Joel was the calm in the eye of the storm.

Joel: Everything in camp happens in a bubble. Eliav often refers to Shabbat as an island in time, referencing Abraham Joshua Heschel’s “palace in time.” I think of the entire summer as an island in time; the world shrinks to a few hundred people, every single day has enough going on to fill a week, and every week goes by so fast it seems like a day. There is no time to try to be who you think people want you to be at camp which makes it the norm to be genuine. I learned how empathic Lauren was when working with a homesick child and how she responded to stress before I ever knew her favorite color. I fell in love with who she was, and is, before I had a chance to deal with anything trivial.