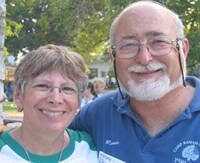 Ronnie moved to Ramah Wisconsin from Ramah California the summer before we met at the urging of his friends from JTS. I was living in Israel after many years in Wisconsin, and came back to camp after a break of several years at the urging of Rabbi Burton Cohen – who was then the director in Wisconsin.

I came to camp in the middle of staff week as a first-year rosh edah. Burt gave Ronnie the task of teaching me how to do my job. We spent a few hours together right after we met and were married the following summer. Camp was and still is very much a part of our lives to this very day. We both grew up in Ramah and our four children have grown up in Ramah. When we met we were living in two different worlds – and we still live in two different worlds, but together – camp in the summer and Israel during the rest of the year.