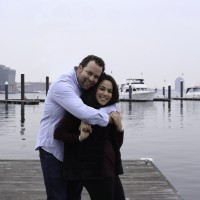 Over a decade ago when Tamar and Adam attended Camp Ramah in their respective home states, neither could have imagined the gift camp would bring.

Fast forward ten years to May 30, 2014 when Tamar was on a temporary work assignment in Los Angeles and decided to attend a Ramah Young Adult Leaders shabbat dinner.

Adam caught Tamar’s eye right away. She was impressed with how outgoing and friendly he was – it was almost as if he was the organization’s co-president, responsible for making everyone in the room feel comfortable. Fortunately or unfortunately, that turned out to be the case which meant Adam had a list of responsibilities to handle that night and couldn’t connect beyond a quick hello. Luckily, a few hours later, they wound up at the same table. Almost immediately, they made the connection that Tamar worked at the same law firm Adam’s sister would be joining in the fall. Tamar knew right away that if Adam was anything like his older sister, he was likely to be a catch.

The couple had their first date two days later on Sunday. They met at Bodega Wine Bar in Santa Monica where both pretended to be interested in a horrible board game the restaurant had displayed for game night. Neither wanted to risk sounding negative by putting the game down so they continued throwing dice at a row of letters trying to spell the word “jackpot”. Little did they know, they truly hit the jackpot that night.

Tamar and Adam dated for the next two months until Tamar returned to New York (where she is from). They remained friendly, exchanging phone calls and text messages. Four months later, Tamar decided to take a leap of faith and move to California. They had not spoken in a few weeks and, at the risk of sounding as assumptive, Tamar decided not to share her decision with Adam.

Just two weeks before she moved, Adam sent a text message apologizing for not having been in touch and asking what was new in her life. Trying to act casual she responded “just getting ready for the big move.” Two minutes later, her phone was ringing with Adam’s picture as the background.

Now in a slight panic that she had not given him warning of her move, she decided not to answer. She still has the voicemail he left on October 15, 2014 expressing how excited he was that she would be coming back to the west coast (and she listens to those 39 seconds quite often).

A few weeks later, the couple was on their first date, again. They met for dinner in Venice where things felt even more comfortable than where they had left off. Fast forward once again to today and they still cannot believe their reality.

Adam proposed to Tamar in early 2016 and they plan to get married sometime in 2017.