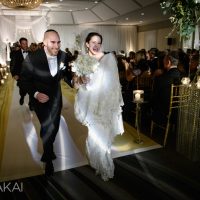 Dani (Nivo 08) and Dan (Nivo 07) both attended the Ramah Day Camp in Wheeling when it opened. They both attended Ramah Wisconsin as campers and came back for staff. They met the summer of 2010. They were both on Garinim staff. Dan was a 2nd year tzevet and swim instructor on the agam and Dani was a 1st year tzevet. They started dating that summer and continued to date long distance throughout college and graduate school. Dan proposed to Dani on January 21st, 2017 and they got married on January 13th, 2018. Ramah has and will always be an enormous part of their lives (even their Ketubah has artwork of the agam on it and they did kikar dancing at the wedding!) Dani and Dan live in Chicago with their cockapoo puppy, Sonny.