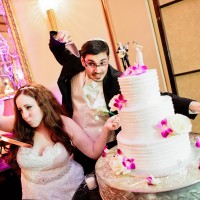 In the beginning of 2012, Laura was in Israel on OTZMA and Ari was finishing his degree at Binghamton. They were both looking for jobs and stumbled upon the American Hebrew Academy where they had an intensive Fellowship program. They both applied, both were offered the job, and both showed up in August of 2012.

Laura’s perspective on their first meeting:It was staff orientation week and the group of Fellows were just finishing their lunch when a new Fellow who was coming from working at camp showed up in the dining hall. He was wearing the most bright, blinding, neon green Ramah New England staff shirt, and that’s all I noticed about him. I walked up to him and said “Hi, my name is Laura! I’ll be working with you this year.” He was very quiet and shy. He said “Hi, I’m Ari. Nice to meet you,” and then I walked away because I was a busy woman.

Ari’s perspective on their first meeting:I walked into the dining hall right when I got to AHA’s campus and was overwhelmed by all of the Fellows who seemed to already know each other. I was wearing my awesome, green Ramah t-shirt from ’04. This girl walked up to me and said “Hi, my name is Laura! I’ll be working with you this year.” So, I said “Hi, I’m Ari. Nice to meet you.” And then she walked away from me and I thought to myself “Yeah, that girl has no interest in getting to know me at all this year.”

Night after night, they stayed up talking, realizing they shared the same hopes and dreams for their futures. The fact that they were both Ramah Alumni (he, New England; she, Darom) was a huge attraction for both of them, though they still argue which one will receive their kids.. Within 5 months, they were dating and within 15 months of dating, they were engaged!  They got married on May 17th, 2015 in Boca Raton, Florida.