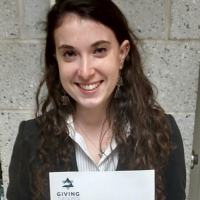 Naomi attended Ramah Berkshires as a camper for six summers before returning to camp for her true calling – waterfront staff. She continued her Jewish journey at Binghamton University, where she served on the Hillel at Binghamton executive board for three years and helped found Keshet, a Jewish LGBTQ Inclusivity group. Having graduated with degrees in Marketing and English, Naomi now works as an editor at a content marketing firm in Midtown Manhattan. A lover of words, you can read more of her work (especially regarding Jewish and LGBT intersections) on her blog.

As campers at Ramah Berkshires, my friends and I were all aware of the Breirah program. We understood that there were a few fellow campers in our edah who sometimes needed extra assistance, or who reacted differently than we did when excited or frustrated – not that it mattered. These campers were simply our friends and bunkmates, no questions asked.

One of my best friends from home was on the autism spectrum, and growing up, I saw the bullying she endured at school firsthand. Such a thing simply didn’t occur at camp. The campers in the Breirah program were integrated into our bunks and activities. As campers, we didn’t realize what a special thing this was.

Thanks to Breirah B’Ramah, campers with social, emotional, or learning challenges are able to experience the magic of Camp Ramah in the Berkshires alongside their peers. This inclusive, immersive program is one that benefits the campers both inside and outside the program in indescribable ways.

Ramah Berkshires is not the only Ramah camp with such a program. The National Tikvah Network allows programs such as the one at Ramah Berkshires to give campers with differing physical, emotional, and developmental abilities the chance to experience camp. From sleepaway camps to day camps, situations where the campers live with mainstreamed campers to ones where they live with others in their program, the Tikvah Network offers something unique to these campers and their families.

Just a few weeks ago, I had the opportunity to attend a Soul Cycle fundraiser for the Tikvah program. I sweated for an hour alongside friends from camp that I hadn’t seen in years, friends from other camps that I met along the way, and fellow Ramahniks whom I had yet to meet. The money we paid to attend the event was to support the Ramah Israel Bike Ride and Hiking Trip, which in turn supports the Tivkah network. We were all proud to have contributed to such an important inclusive program, and such a key Jewish value.

The Tikvah Network is not the only way that Ramah camps have shown themselves to be inclusive to all Jewish campers. Over the past few years, I have been excited to hear from friends who still work at camp and to read in Jewish newspaper articles about how Ramah camps are becoming a more inclusive and accepting place for campers who identify as Lesbian, Gay, Bisexual, Transgender, or Queer (LGBTQ.)

This is, sadly, no easy feat. Jewish texts and traditions have the tendency to be patriarchal, heteronormative, and gender restrictive. But just as we in the Conservative egalitarian community have reinterpreted much of our practices and reshaped them for our modern times, we can continue to do this in order to create an inclusive environment for our campers.

Whether this entails using non-gender specific language when talking about Jewish lifecycle events, ensuring that all activities are available to campers of all genders, or even the most supposedly far fetched—creating gender inclusive bunks, that is up to our camp leaders and teachers to decide. These conversations have started, and they must continue to be had on the camp administrative level, and with the campers themselves.

It is incredible to see that camp is an environment for campers of varying abilities and needs. It is imperative that we continue to support the Tikvah Network and all it does for campers in our community. The next step is to follow this model to make camp an even more inclusive and accepting place for Jewish campers of all genders and sexualities. If my experience has shown anything, the campers will be completely accepting – no questions asked.