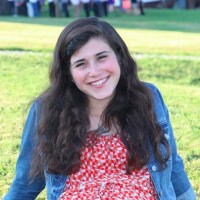 Our discussion about the Holocaust began last night, even before our visit to the Ghetto Fighters’ House Museum today. We broke into three groups and talked about the Holocaust, its relationship to camp and to Israel. The discussions varied among the groups, however all were meaningful.

This morning started at the Ghetto Fighters’ House Museum in the Upper Galilee. We broke into two smaller groups in order to have a more intimate experience. Each group was paired with a guide who conducted thought provoking conversations and allowed us to wander around the museum. The museum focused on the bravery and spiritual triumphs of Jews during WWII. This was a new perspective on the Holocaust for many of us.

After the museum we had some free time at a mall for lunch and then headed to Florentine, an up-and-coming section of Tel Aviv, for a graffiti tour. Our tour guide walked us through the streets, bringing the city to life through its art. We were intrigued by the deeper meanings of each artwork as the guide exposed us to the significance of color, symbols, and texture.

Our day was extremely educational and enjoyable. We had the privilege of thinking about the Holocaust in a new way because of the approach taken by the museum. Learning about the Holocaust can get repetitive, so it is critical to keep educating yourself through new lenses. As our guides pointed out, Jews have a responsibility to not only learn about this tragedy, but also do something about it.

I can only imagine the reaction someone who experienced the Holocaust would have while visiting at a Ramah camp—to see hundreds of kids loving Judaism, learning to be Zionists, and embracing who they are while enjoying the summer in an idyllic setting.  I would hope that as the survivors witnessed this vibrant Jewish culture, they would feel a victory against the Nazi’s Final Solution.

I once read that every Jewish birth is a victory over the Nazis. This is very true, but I believe that every Ramah camper is also a victory for the Jewish people. Ramah is fostering Jews, creating strong Jewish identity that will lead our people for the future. Camp Ramah allows kids to find themselves, be proud of who they are and make some of the best friendships along the way. With every summer and every program, Ramah is the victory, and it is a true honor for me to be a part of it.

Gracie Gottlieb, 19, is from Merion Station, Pennsylvania. She is currently a sophomore at Muhlenberg College studying business with a focus on marketing. She is also currently serving as a Ramah Service Corps Fellow in Allentown, PA. For the past ten summers, Gracie has attended Camp Ramah in the Poconos, seven as a camper and three as a staff member. She will be returning to camp this summer for her third time as a bunk counselor.