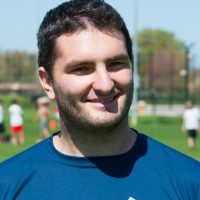 Gideon Weiss just joined the NRC team and is a recent graduate of Emory University, where he studied modern American foreign policy. He also played for the Emory Ultimate team (Go Juice!) and hopes to join a club team in the spring. Gideon recommends several new fall T.V. shows including Pitch, Designated Survivor and The Good Place. Perhaps one day, he will be Secretary of State. A longtime member of the Ramah Berkshires Mishpacha, Gideon has spent the last three summers as a Rosh Edah.

Manhattan is enveloped in grey. The streets are grey, the sky is grey and the details of the city blur together. A cold, brisk wind hits me as I take the steps up the 116th Street subway station. On the one hand, it’s about time. Friday was the last day of September and Mother Nature finally decided to get on the same page as the calendar. But on the other hand, the cold means shorter days and for me, a job. I graduated college only a few months ago and yes, like many recent graduates, I still cling to the vestiges of my former life. My wardrobe remains sixty percent ultimate Frisbee apparel. I also have frequent nightmares that my thesis is due the next day and I haven’t written a page. So the end of summer and the atmospheric reminders that come with the change in season act as a particularly sobering divide. Entering the workforce, particularly when you don’t know what you want to be when you grow up, is daunting.

Like the weather, the Hebrew calendar has similar delineations. This evening, we mark the new year and a (hopefully) fresh start. For almost my whole life, the High Holidays have been an on ramp to a ten month highway, one with an exit clearly marked “June.” During the allotted periods of reflection, I could do a self-debrief on the last year and envision the one to come. Each year had different metrics, or signposts that guided me along the way. But this year, Rosh Hashanah acts as a beginning to a longer road trip called adulthood. (Yes, you were supposed to read that last sentence like the protagonist’s voiceover in a coming of age movie. You know the part at the end, when the lesson is learned and that alternative rock music starts playing?)

So what now? (I would be remiss to note that several professors would not be pleased with that rhetorical question.) Well, the most Jewish thing to do in the face of change and uncertainty is to cling to tradition, to find comfort and guidance in the foundations of the past. Or in other words, go back to camp.

Every day at 9:00am, the weather warms up. The computer screens around me flash gorgeous pictures of lakes, dense green forests and clear skies. Words like “summer,” “program,” and “camper” are thrown around like “buy,” “sell,” or “hold” on a trading floor. T-shirts embroidered with familiar Hebrew-English hybrids are prevalent and yes, acceptable. Despite the temperature outside, I find myself yet again back at camp. It is different; there is less dust and grime, the hours are shorter and my role is different. But that familiar energy surges through the office. It is the result of people who still haven’t let their inner child grow up. Everyone has the same goal, ensuring not only the success of next summer, but the success of the Jewish camping movement, years into the future. So as the seasons turn, a new year begins and I start a new job at the National Ramah Commission, I find myself working and living ten months for two.