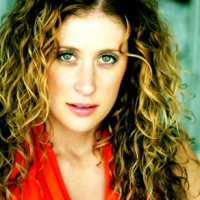 [Imagine how delighted I was to attend the Broadway production of Hair starring former camper Caissie Levy from Ramah Canada. As she told me and my wife, Cari, backstage after the performance, “I first played this exact role at camp, where the show was entirely in Hebrew and look at the stage I’m on now!” Caissie grew up at Ramah Canada playing the lead in many edah productions. In the spring of 2009, I asked her to reflect on the impact of the Ramah experience on her life and career. — Rabbi Mitchell Cohen]

Ramah strongly influenced my career choice and career growth. The musicals we did every summer at Ramah were huge building blocks for my career onstage. I started in Arazim when I began attending Ramah at the age of eleven. Subsequently, I looked forward to performing in our all-Hebrew musicals each summer. They were the highlight of my time at camp.

Ramah, in general, was a musical place and that really influenced me. Whether we were singing birkat hamazon, davening Shabbat minhah, or having an oneg in the ̇hadar ochel, there was always song. That had a big impact on me. In addition, Ramah made Judaism fun. I grew up in Hamilton, Ontario, in a Conservative synagogue, with traditional parents. I attended the Hamilton Hebrew Academy with my two brothers, and Judaism was a huge part of my life. But going to Ramah each summer and connecting with other Jewish kids from all over Canada and the United States made Judaism less about religious rules and more about community. Ramah brings kids together from all levels of observance and encourages them to ask questions and examine their feelings about being Jewish. Of course, it was also refreshing and freeing — especially in my high school years when I was attending public school — to have a place where I didn’t feel like I was in the minority.

To this day, my Ramah friends are still my closest friends in the world. We grew up together. We’re practically family. Many of them now live in New York, and they’re always the first friends who come to see me in my shows. Even Ramah people I rarely keep in touch with are always popping up in the audience, and it’s wonderful to see them. My friend Jon Ross, who is head of drama at Ramah Wisconsin, is still a dear friend, and we have supported each other in our theater careers in New York. We first met when I was in Magshimim when Ramah Wisconsin campers came to Ramah Canada for their annual visit. We’ve kept in touch ever since, and just recently he and a bunch of my other Wisconsin friends (from my bus on Israel Seminar) came to see Hair.

I feel as though I did most of my growing up at camp, and it shaped who I am today. Nearly all of my childhood memories revolve around Ramah. It was an amazing, magical place where kids could just be kids, explore their Judaism, make lifelong friends, and be free.

You can read more about Caissie here.