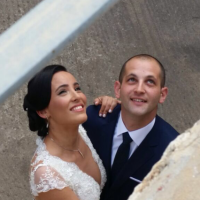 Omer and I met in the Summer of 2010 at Ramah Darom. I was returning for my second year as the head of climbing staff and he joined for his first year on climbing staff.

From the beginning of staff training I was impressed by his work ethic, his kindness, his modesty, and his great personality (ask my dad – I called him to tell him about Omer).

As we got to know each other better, we discovered how alike we were and how much we had in common.

When the summer was over, I traveled for five and a half months to South America while Omer went back home to the Army. He waited for me to come home so we could start a real relationship. During my trip we stayed in touch and when I returned home in January 2011 we officially started dating.

Shortly after, we moved in together, adopted our amazing dog, Lichi, traveled together, and finally got engaged! In the past 4 years we have been through so much but each experience made us appreciate each other and fall more in love every day! We are truly blessed and we thank Camp Ramah Darom for giving us the chance to meet and fall in love.