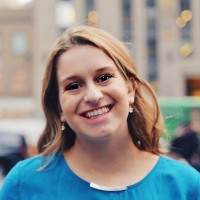 Valerie “Val” Weisler is an alumna of Ramah Day Camp in Nyack and Ramah Poland/Israel Seminar. She is the Founder and Chief Executive Officer of The Validation Project, a global initiative that links more than 6,000 teens worldwide with mentors who help them find ways to use their passions into positive social action. A recipient of the prestigious National Jefferson Award for Peace and Justice, Val has appeared on The Meredith Viera Show and CNN, and has been featured in articles in Crain’s New York Business, Inc., and CNN: Money.

My story begins the way most Jewish kids’ stories do—when I was eight years old, I started my first summer at a Jewish day camp, Ramah Nyack. As I got older, Ramah grew older with me. All of my important “firsts” were at that place I called home. I learned Hebrew on the steps of the porch from an Israeli army counselor; I climbed my version of Mt. Everest at the rock climbing course; made challah for Shabbat in the kitchen; became a diver after many, many tries in the pool. Those were all the cliché summer moments. But for me, Ramah Nyack was and always will be my favorite place on earth. It taught me what a real community is, a community I’m lucky to be a part of. When I entered high school, my bubbly self stayed at camp and teenage angst came to play as I began to get bullied for being shy. Hebrew words turned into curses, art projects turned into notes telling me to leave school, cooking in the kitchen became hiding in the library because no one would sit with me at lunch.

But the one thing that didn’t change from Ramah was the community. I knew I would always have that. So, one day, I decided I wanted to take the Ramah community and open it to the public. There were kids being seriously bullied because they didn’t have Ramah, and I wanted to stop it. I started a website called The Validation Project, with a mission to spread kindness. In a few weeks, The Validation Project went viral and my little site turned into a global nonprofit, which now works with 6,000 teens in 100 countries to solve issues all over. After a while, the bullies stopped and the project kept growing.

Fast forward two years. I’m at a staff training program at Ramah New England,  standing in front of my former Nyack counselors and Ramah staff from across North America. I’m getting ready to present The Validation Project. I’m so nervous—the people standing before me are my heroes. I give my talk, exchanging jokes only Ramah kids know with the audience, and then grab my stuff to go toast some marshmallows and call it a day.

And then, he walks up. No, not Obama, or Kanye West or Justin Timberlake. I’m talking about the real celebrity, Rabbi Mitch Cohen, the national director of Ramah. I’d heard about him, but never thought I’d meet him, let alone have him be part of my audience.

Mitch and I shook hands and he asked me a simple question.

“Have you ever been to Israel?”
I answered “no,” not thinking anything of it.

“Do you wanna go to Israel?”
I answered “DUH,” not thinking anything of it.

Fast forward one month. I am on Ramah Seminar, standing at the Poland airport with Ramah campers I’ve never met, about to embark on a crazy adventure in Poland and then, Israel.

I thought I’d miss Ramah Nyack. And sure, I did. I missed the grass that was never green because of how much we dance on it and I missed the familiar faces all around me, but what I was never told about Ramah was that it never ends. There are no geographical boundaries or a deadline. The Ramah community is global. It was with me in Poland, where a bus full of people I was too nervous to introduce myself to became my best friends, the shoulders I cried on as we walked through Auschwitz, the hands I squeezed as we heard the numbers of how many died. The Ramah community was with me when we went to Sobibor, a former death camp that hundreds of Jews escaped from, and all that was left was a memorial—the camp now taken over by houses raising families above my ancestors’ bodies. We stood on the grass, held hands, and sang Jewish prayers in unison together—that’s Ramah. Ramah was with me in 90 degree weather when we hiked down the steepest mountain I’ve ever seen.

Ramah was with me when I got up in front of 250 teenagers who are now my closest friends to share my story, cheered on by my group holding signs for me as I spoke. Ramah was with me as I heard my friends’ incredible ideas of how to change the world and like always, Ramah is the one that told them, “All right then, let’s make it happen.”

Ramah was with me when I got the phone call that my 93-year-old grandmother from Poland died.

Ramah is with me as I’m going through my senior year of high school and Ramah will be with me for all the big and little moments to come. Whether it’s the special places I remember in Nyack, Poland, or Israel, I know now that summer camp never ends.

Ramah is and will be always with me, and if you’re reading this, Ramah is with you too.