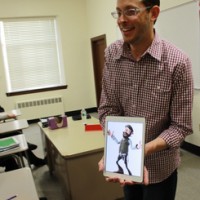 Have you ever looked for “Easter Eggs”, or hidden messages, in Disney or Pixar films? Camp Ramah in the Poconos alumnus and director/animator Saul Blinkoff is working to make sure that some of these “eggs” have Jewish meaning. In his directorial debut of Disney’s Winnie the Pooh: Springtime with Roo, Blinkoff said:

When I looked at Winnie the Pooh’s house, which is made of a tree, I noticed that it was missing something,” he said. “So I sharpened the pencil and I drew a mezuzah on his door, and in my head, I called him not Winnie-the-Pooh, but Winnie-the-Jew.”

Utilizing film and animation as a way to connect Jewish young adults to their identities, Blinkoff is hoping to help young people “find where they fit in” as Jewish adults.