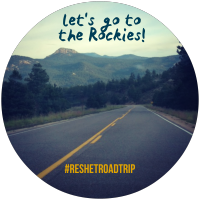 Note: This blog post was written by Dana, who sadly traveled without Laura on this portion of the Reshet Road Trip.

A wise man once said, “Of all the paths you take in life, make sure a few of them are dirt.” This wise man must have been referring to the absolutely beautiful Ramah Outdoor Adventure, our newest camp in the stunning Rocky Mountains, which can only be reached by miles of dirt road. Perched 8000 feet above sea level in a haze of clouds and pine trees, the unique community of ROA, 150 campers and 80 staff strong, invited me to their kehilla for Shabbat, as well as for the dedication of their new year-round retreat center, Beit Kesher.

As I rolled into camp after a somewhat jittery ride (word of advice people: follow the printed directions!) I arrived just in time for all of the campers to return from their masaot, or off-site trips. The buses pulled into camp with cheering, singing campers, streaked with dirt and covered in smiles, hugging their rashei edah, shouting things like “You should have seen this awesome moose we saw!” and “We hiked in snow and it was sooooo cold but soooooo awesome!” It was amazing to watch the campers and staff, who should have been totally exhausted, laughing and running around with such energy and excitement, sharing their adventures with friends from other edot and with Rabbi Eliav Bock, the camp director, who high fived campers as they dropped off their backpacks and sleeping bags. On the open road to Rockies!

After some quick showers (ROA uses an underground well for their water source, so each camper gets “3 pumps”, or approximately 90 seconds to shower, in order to conserve water), the campers and staff were dressed in their Shabbat finery, which in this case was white, and gathered near the Ohel Moed for some pre-Shabbat rikud, led by staff member Dave. As the kids rocked out to “Derech HaMelech”, “Jungle”, and “Ziben Ziben”, Rabbi Eliav began to usher in Shabbat, and the whole camp gradually moved towards an outdoor davening area. Before Kabbalat Shabbat officially began, the director of chinuch, Moshe, asked the campers to raise their hand if they earned a “red bracelet” this week. I looked at all the campers raising their hands, and realized that many campers and staff were wearing rubber bracelets in different colors, some saying “commitment”, “loyalty” or “friendship.” ROA has a set of values they like to instill in campers and staff alike, and as a way of demonstrating these values, campers and staff can earn bracelets that describe each of these values. Moshe then called on several campers to share how they earned their bracelets, this week was “friendship”. It was really amazing to hear how these campers and staff truly acted on the core values of their camping community. Led by both campers and staff on guitars and drums, the Kabbalat Shabbat was unlike anything I’ve ever experienced before. The pure joy and happiness in the eyes and voices of every camper and staff was overwhelming–it almost made me well up with tears. After such difficult times in Israel over the last few weeks, being in such a beautiful community, celebrating Shabbat and celebrating the strength of the Jewish people, was so desperately needed. As I danced with the campers and staff in large circles, singing the classic “Yi Ni Ni”, the feeling in the air was truly euphoric. As Kabbalat Shabbat came to a close, two campers lit the candles to usher in Shabbat. A beautiful Maariv followed, and before we knew it, it was time for dinner.

In the Ohel Ochel, we learned about the delicious dinner we were going to be eating, something I learned happens before every meal. In order to educate the campers about where their food comes from and the process by which it is made, a food educator stands before the community and shares some info about their upcoming meal. For Shabbat dinner, we learned about the seitan brisket, which took a total of 32 hours to make from start to table. It was well worth the wait, as I devoured the delightful BBQ seitan, as well as the BBQ beans, mashed potatoes, and rosemary challah made from herbs on the camp property. ROA has 23 horses, each with their own Hebrew names.

After an awesome staff oneg, where I shared some of the exciting Reshet Ramah projects, I was off to bed to get ready for an awesome Shabbat day. Waking up to the bluest sky I’ve ever seen, I walked to the Ohel Moed for Shacharit, which was led by both campers and staff. Following the lead of the Shir Chadash Minyan in Denver, the minyan focused heavily on song, and was incredibly beautiful. After a light breakfast, the camp gathered back together for Torah reading, which was split up by age. Rabbi Eliav spent Torah reading with the eldest edot, encouraging both campers and staff to ask questions about the parsha in exchange for some delicious candy. I was super impressed with the kids’ questions: little Rashis and Rambams in the making!

After Torah reading and a group musaf, some campers had free time while others joined in for a limmud with Rabbi Daniel about the history of Tikkun Olam. After limmud, it was time for lunch, a light meal of vegetable soup, salad, and quinoa. Full of protein from lunch, I went for an awesome hike with Ari, the communications and outreach coordinator, and Joel, Rosh Masa, atop of Givat Ilanot, a mountain that looks over all of ROA. It was truly beautiful (and sad I couldn’t take a picture). Dana on top of the world! (or the roof of the office, taken on Sunday)

As Shabbat began to wind down and Havdalah began, it was amazing to see the kids come together and sing their hearts out. After another energetic rikud session, it was time for bed, and time for me to get ready for the exciting day ahead! As the light of Sunday morning crept through my window, it was another gorgeously blue and sunny day at Ramah Outdoor Adventure! This beautiful weather was perfect for the dedication of the new year-round retreat center, Beit Kesher. As the ROA Development Director, Sandra, and I checked in guests for the event, the feeling in the air was pure excitement. The look on the guests’ faces as they pulled into camp was really magical; wonderment in their eyes, excitement as the kids whizzed by on bikes. They too realized the uniqueness and awesomeness of this place.

Around 2 PM, with some pretty tasty hors d’oeuvres, we began the celebration. As we honored those who made the building possible, as well as those who’ve made Ramah Outdoor Adventure possible, it was truly an honor for me to be sitting in the room, witnessing such outstanding forms of Jewish philanthropy, generosity, and passion towards bettering the greater Jewish community. The dedication of Beit Kesher with a brand new mezuzah.

Post celebration, I was lucky enough to bounce around camp for the rest of the day. I taught a classic Ramah Nyack dance, Ole Ole, to the Metalayim girls, took part in the JOLI scavenger hunt, and event gave hargaot to Bogrim boys. I felt so special to be included in the ROA community, even just for a weekend, and their warmth and inclusiveness speaks volumes about what ROA stands for. The trip was unbelievable, and I was truly sad when I had to leave (at 6:15 AM, no less). I look forward to my next visit to Ramah Outdoor Adventure, and to our next stop on the Reshet Road Trip, Ramah Day Camp in Nyack!