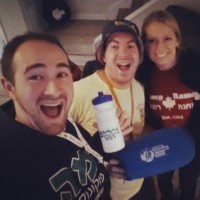 This year we have three amazing Ramah alumni working full time in the Detroit area as part of the Ramah Service Corps. Meet Nadav Davidson, Sam Mellits, and Darrien Sherman!

Nadav hails from Arad, Israel, where he spent the last three years serving as a combat soldier in a special forces unit of the IDF. He has spent years working with youth in Israel through day camps, academic mentorships, and leadership programs. Nadav was a member of the mishlachat at Ramah Nyack this past summer. Email Nadav

Sam was born and raised in the suburbs of Philadelphia. Through his years of Jewish day school, Camp Ramah, and a semester in Israel, Sam has both knowledge of and passion for Judaism and Israel. He spent four years on staff at Ramah Poconos, and was a rosh edah this past summer. Sam recently graduated from the University of Pittsburgh, where he studied psychology, history and chemistry. Email Sam

Darrien is a Detroit native who recently graduated from the University of Michigan, where she earned her bachelor’s degree in psychology. She was a Metro Detroit Fellow last year and is anticipating another successful year in the program for the community. Darrien spent many summers at Ramah Canada as both a camper and staff member, most recently as a rosh edah supervising and creating programs for Ramah campers. Email Darrien