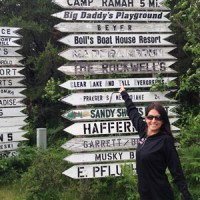 This reflection was originally posted on Oy!Chicago.

This one time at Jewish overnight camp … I discovered my calling.

No, I am not a rabbi. No, I am not a teacher. And I am not a social worker either. Instead, it was at Camp Ramah in Wisconsin that I realized I wanted to work in the health field.

Today, I am a licensed acupuncturist practicing in Northbrook. Being an acupuncturist is about helping people to be at their healthiest, and there was never a time when I felt healthier and more spiritual than when I was at Camp Ramah, and to me, being healthy and spiritual are synonymous.

At Camp Ramah, you are required to take classes. Now, before you start to roll your eyes at the notion of spending time learning over the summer, think about how much more peaceful it is to learn while getting your daily recommended dose of Vitamin D. These “classes” included art, woodworking, basketball, softball, boating, Hebrew, and yes, some Torah. Although I had been receiving Jewish education my entire life, nothing had more of an impact on me than a class at Ramah that lasted just two weeks about the connection between Judaism and science.

The main “connection” that we focused on during the two weeks was how the ten plagues can all be explained through science. The blood in the river can be explained as red algae, which caused the fish to die. The weather conditions weren’t the best at the time, which led some to believe that a set of storms came through, including hail. The final plague, the death of the first born, was caused by a fungus on the grains, and since the firstborn males were the first to eat, they were more susceptible to being affected by the fungus. My teacher pointed out that the miracle wasn’t that all of these incidents occurred, it is that they happened when the Jewish people needed them the most.

I spent the rest of that summer finding little connections between Judaism and science/health. As I walked around the beautiful Ramah camp grounds in Conover, Wisconsin, I started to believe that all the fruits and vegetables given to us were also miracles. These foods give us our essential vitamins and minerals but, just like with the plagues, the most important aspect is the miracle that they exist. As this became clearer to me, I knew that I needed to devote my life to health and wellness.

I continued to learn about science after camp and I went to graduate school for Chinese medicine. Coincidentally, Pacific College of Oriental Medicine is located in the very same building as the Camp Ramah office in downtown Chicago. Maybe this was fate!

While I was in school I found many fascinating connections between the 4,000-year-old practice of Chinese medicine and Judaism, which is also about 4,000 years old. I wanted to share these connections, which I would not have made were it not for Camp Ramah, and help Jewish people become healthier.

As an acupuncturist, I help people to balance their bodies. Balance is the key to health, and is the basis of Chinese medicine. Looking back to my time at camp, I realize that campers are perfectly balanced throughout a summer at Ramah. Little miracles harmonized our summers, like a rainy day when we needed a break from running around, or an opportunity for puddle jumping when we needed some good cabin bonding. We might see a bolt of lightning at the same time we saw the boy or girl we had a crush on, or experience the most beautiful sunny day when an outdoor basketball game was scheduled. All of these natural occurrences balanced us throughout the summer.

Jewish camp is a place where many people become more religious, learn to pray, or meet their soul mates or lifelong best friends. Some campers go on to become rabbis, cantors, or teachers, while others pursue professions not directly related to their camp experience. I chose to take the spirituality that Ramah instilled in me to feed my love for science.