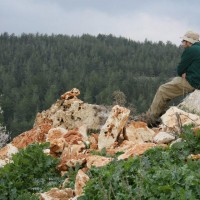 At the age of 14, following my fifth summer at Camp Ramah in the Poconos, I made a life-changing decision: one day I would make aliyah and become a Masorti (Conservative) rabbi. Ramah modeled for me what a model Jewish community looked like, and I wanted to not only find that community in Israel, I wanted to create and lead that community in Israel. One more summer as a camper, 10 summers on staff at Poconos and on Seminar, and five semesters working for TRY later, Ramah allowed me to grow as an educator, to practice my Hebrew, and learn more and more about who I am as a person.

Ramah demonstrated for me the beauty and joy of Jewish living, and it was there that I decided to keep Shabbat, there that I learned how to read Torah, and it was even Ramah that taught me how to comfort the mourning.

Ramah taught me how to live with people with different personal practices than me, and it taught me that Judaism is a journey, validating wherever we may be on it. At Ramah I first encountered the serious study of Jewish text, and later I learned how to teach Jewish text. Ramah gave me ownership over my Judaism.

There were all of the trivial things, which turned out to be not so trivial. Like the time at the end of my first summer on staff that I heard Hebrew hip hop for the first time (it was Hadag Nachash’s “Shalom Salaam Peace”). I had to find it, so on my next trip to Israel I bought the album, together with a few other recommendations. By the end of my senior year of college, I had completed a 100-page thesis discussing the discourse around Israeli identity found in the music. For years, it served as the authoritative English-language work on the subject. Admittedly, it didn’t have the largest audience, but it was nice to be an expert in something.

I’ve lived more than half of my life since deciding to make aliyah, and sure enough, I’m in my ninth year living in Israel, beginning my third year of studies at the Rabbinical School at Machon Schechter. I have a “dream job,” working as the student rabbi for NOAM- the Masorti youth movement in Israel. The job combines all of my best jobs at Ramah over the years- I am a madrich, I am Rosh Tefillah, I am sometimes even Rosh Drama.