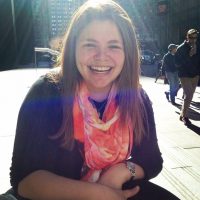 Rachel is currently a Masters Student of Teachers college at Columbia University. She was inspired to study Early Childhood General and Special Education after her many summers working in Kochavim at Ramah Nyack. She is from Long Island but currently resides on the Upper West Side. Rachel attended Binghamton University for undergrad and before starting graduate school, she became a Joel Daner Fellow at the National Jewish Council for Disabilities. After finishing her masters she hopes to work in an inclusive early childhood classroom and eventually explore the world of education policy.

Adulting: “Doing grown up things and having responsibilities such as, a 9-5 job, a mortgage/rent, a car payment, or anything else that makes one think of grown-ups.” (Thanks Urban dictionary.)

As a twenty-three year old graduate student living in New York City, I have discovered that growing up is far from easy. I have been blessed with an amazing family and a support system, but nobody tells you that life after college means you’ve entered an alternate universe – called reality. Within this new world you face some changes you never expected to face. Your friends get boyfriends and girlfriends, start having to put their phones down at work, move away and actually go to bed before 10 pm. Sometimes I ask myself, where did my community go? Why do I all of a sudden feel so alone?

Let’s be honest, that first paragraph was pretty depressing. Yet I’ll tell you something that cheered me up. This past Friday night I was able to have Shabbat dinner with three of my friends from Ramah. As I sat down at my Nyack-roomates’ Shabbat dinner table, I felt as if the weight of the world lifted off my shoulders. I felt at home. I laughed uncontrollably as we spoke about memories from the migrash and awed as we brought up old campers and wondered what they were up to. It was as if the happiness I felt when dancing during Shishi al Hamigrash, running through the sprinklers with my five-year-old campers, and late night sing along sessions with my roommates was injected back into my system, consuming me with joy. For the first time in a while, I did not feel like I was adulting anymore. Though all of my Ramah friends at that table had changed in one way or another, our love and our strong attachment and loyalty to one another remained the same.

So no matter where your new job moves you to or who you swipe right for, one thing will always remain the same – your Ramah community. It’s easy to go MIA when we are all wrapped up with work and school, but don’t forget about that dose of happiness you receive when you are around your Ramah friends. I didn’t realize how much I needed that until this past Shabbat, but it was exactly what the doctor ordered.