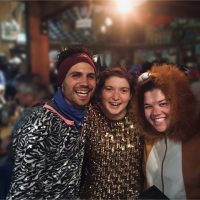 Two weeks ago, I had the pleasure of visiting the Backcountry Bayit (BCB), after months of hearing about the magical community they’ve built up in the mountains over the last few seasons. On Friday afternoon I drove from Denver through the regal Rocky Mountains of Colorado, growing more excited as the temperature dropped and snowflakes dusted my windshield. Eventually I made it to Frisco, a tiny ski town with a population of a mere several thousand, and headed over to the BCB.

Chanukah lights, an unlocked front door, and a mudroom full of shoes, cubbies, and a whiteboard with a welcome message informed me I had arrived. The smell of latkes washed over me, and inside people were already chatting, introducing themselves, and getting into the spirit of Shabbat. Hindy, one of the six BCB residents, was at the stove scooping batter from the largest bowl of latke batter I’ve ever seen and adding it to a sizzling pan. I met Zack, Ellie, and Seth–more of the BCB residents–as well as others. People continued to arrive—a mix of Colorado transplants and East Coast visitors, each of us sporting warm socks and easy smiles as we transitioned into the joyous, peaceful energy of Shabbat.

After an hour or so of mingling, we gathered around the collection of menorahs at the window, where Seth had meticulously poured olive oil into a real oil menorah (I’d never seen such a thing) and Hindy had left her latke post to twist homemade cotton wicks for each tiny oil-filled cylinder. We sang the brachot together for the sixth night of Chanukah, adding in “shehechiyanu” for anyone who hadn’t yet had a chance to light during the holiday. After singing the bracha over the Shabbat candles as well, we made our way to the two long tables in the dining room, carefully laid with real plates, silverware, and cloth napkins (as opposed to disposable; the BCB-ers are very environmentally conscious).

I sat down next to a woman who had gone to Ramah Berkshires; another who had attended religious school and known a long-time staff member and Jewish educator at Camp Ramah in Wisconsin; a man who had coincidentally gone to high school in Cleveland with a co-worker of mine; and a woman who works for the BaMidbar Wilderness Therapy program, lived in the BCB last season, and spent three summers working at Ramah in the Rockies. Within minutes, I could establish common ground and feel at home with everyone present (through Ramah, hometowns, or friends in common), despite living very different lives and lifestyles–the ultimate beauty of “Jewish geography.”

Though from various places and backgrounds, the guests were united by a passion for outdoor recreation and a hunger for Jewish community. Most of them worked several part-time jobs (e.g. serving, driving shuttles between Denver and the mountain towns, ski patrol) in order to live out here and ski, snowboard, or hike as often as possible. And all of them had made the trek–from near and far–to spend Shabbat at the BCB, seeming very much at home among the squishy green couches, the spirited singing, the compost bucket signifying a commitment to sustainability. Clearly, this warm and open community fills a niche out in the mountains, where fresh air and natural beauty are abundant, but tight-knit young Jewish communities are not.

After kiddush, we gathered around one of the tables to admire (and devour) the beautiful fig/hazelnut challot Zack had baked earlier that day, laid out in the shape of a giant menorah. (Zack learned how to make challah last season while living in the BCB.) At the kitchen buffet, each resident had contributed at least one delicious dish to the meal: Greek salad in honor of the Maccabees defeating the Greeks (with feta on the side for the vegans, of course), three kinds of latkes to accommodate various dietary needs, and more.

Eventually, I left the Bayit with several recommendations for nearby hikes, a pair of crampons (metal plates with spikes to affix to my boots to prevent slipping on ice), a ridiculously full stomach, and the smell of latkes so ingrained in my clothes that I couldn’t possibly forget it was still Chanukah.

The next night, I again arrived at the BCB, ready for event #2—Havdalah and an evening program with YAD, the Young Adult Delegation from Ramat HaNegev. This group of Israelis was spending time in Colorado and the night at the BCB. When I walked in, the mudroom was flooded with shoes, sleeping bags, backpacks, and hiking gear—the telltale sign that many additional people would be sleeping in the Bayit that night (and snowshoe-ing together the following morning). Inside there were 60 or 70 people throughout the house, filling the two family rooms, sitting in circles on the floor, pouring themselves beverages and milling around the long table piled high with snacks and treats. I immediately spotted two familiar faces in the crowd: Denver transplants from Chicago-—one a fellow Wisconsin Ramahnik, and one with whom I’d gone to both Jewish day school and college. They’d driven together from Denver to visit the Bayit on their way into the mountains. One of them told me she loves coming to the BCB because of the diverse Jewish community it attracts.

After a while, everyone came together for a beautiful, camp-style Havdalah, forming a massive circle, arms over the shoulders of our neighbors. We then lit candles for the seventh night of Chanukah. No one seemed to want to stop singing, with Maoz Tzur followed by Al Hanisim, followed by “nai-nai-nai’s” and niggunim. Leah, the American program associate at JEWISHcolorado spoke briefly about the beautiful connection between YAD, BCB (they did an event together last season, as well), and the Israeli partnership region in Ramat HaNegev. An Israeli shlicha, whose adorable children were scampering around the house, encouraged everyone to mingle with the Israeli delegates in order to form a stronger bond and unique relationship with the people of Israel.

After more noshing and schmoozing, everyone gathered in the larger of the two family rooms for the night’s program, a conversation on sustainability from the American and Israeli perspectives. First, Zack spoke about Havdalah as a separation between Shabbat and the rest of the week, asking everyone to close their eyes and reflect on what Havdalah meant to him/her that week. The room, which had reverberated with the loud, light-hearted laughter of 70 people just minutes before, suddenly became a more serious space of quiet vulnerability. A few people shared their reflections: simultaneous joys and dangers of skiing, personal growth over the course of the year, being very far from home and family (in the case of the Israelis). One man said: “Many of us come from big Jewish communities back home. Moving out here to the mountains, BCB is my Jewish community—I come here every week. Especially in the wake of Pittsburgh when things are scary for the Jewish people, it’s amazing to have this community here.”

Zack then transitioned us into the program, explaining that the BCB had been awarded a grant from Hazon to receive “higher welfare” eggs—eggs that are more expensive but truly ethical. He screened a short, sobering film from Hazon detailing the various myths and realities behind the terms “cage-free” and “free range” as they relate to the treatment of chickens in the US farming industry. We then broke into small groups, where we read and discussed an article about Kashrut and ethics. This opened into a wider discussion about sustainability in America and in Israel. People argued and people laughed, especially when the possibility of harnessing cow flatulence as a new form of energy was proposed to the group.
I left the BCB that night feeling deeply connected: to friends old and new; to the refreshingly easy pace of life in the mountains; and to the larger Ramah Camping Movement that, by supporting the BCB, furthers its mission to foster strong Jewish communities and commitment to Jewish life. I left through a mudroom filled with the shoes of Jewish people who’d traversed life on different paths, finding themselves together in the BCB on a snowy December night, connected by the glow of Chanukah candles and the promise of a warm Jewish home.