(Originally appeared in the June 2016 newsletter of the Jewish Historical Society of North New Jersey.)

Imagine you’re a 13-year-old kid; your whole life up that point has been sports (mostly the Brooklyn Dodgers and the New York football Giants). Suddenly, you are going to summer camp! Eight weeks of sports, sleeping in bunks with a bunch of other like-thinking 13-year-old boys, no school (practically!) and fun. With great hope and expectation, you pack your baseball glove, a few articles of clothing, and off you go. It’s the first day of camp, and I’m tossing a baseball around with my new best friend we’ll call Michael Steinberg. Life is sweet, carefree, and all that you could possibly hope for, and then over the blaring camp loudspeaker, I hear, “Haksheevoo, Haksheevoo, Jerry Stein (not his real name), nah lavo l’bet am” (phonetic Hebrew for “Listen up, listen up, Jerry Stein, please come to the commons hall” (literally, “the people’s house”). A late 1950’s photo of the inside of that rustic building appears below with two of its camper-painted murals. I stopped tossing the ball, stopped moving, stopped breathing and, frozen in place, and said out loud, “What the heck was that?” THAT was my first introduction to Camp Ramah in Connecticut, where I spent the next five glorious summers. Camp Ramah is the Conservative Jewish/Hebrew over-night camp for Jewish children and young adults. When I went, there were Camp Ramah sites in Connecticut, where I went, Massachusetts, Canada, Pennsylvania, Wisconsin, and possibly California. I was very fortunate. My parents could not afford to send me to eight weeks of over-night camp, but my beloved Temple Emanuel in Paterson gave me scholarships so I was able to go. That scholarship was funded by the Max Haubenstock Foundation, which was a Temple Emanuel entity that provided funds to the children of Temple members who were ‘deserving’ (i.e., they were active in the Temple’s youth groups such as USY and LTF, regularly attended Shabbat services and could not afford to pay the camp fees). I was not the only one who received that honor, as other kids also received money from the Foundation. The Foundation continued to support me for 5 years. I was indeed very fortunate! 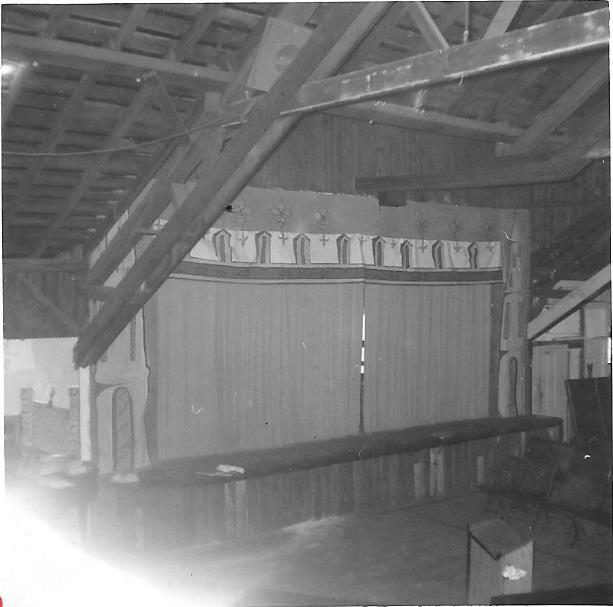 The inside of the “Beit Am” – movies were shown here, roller skating, religious services, and meetings took place as well.

Camp Ramah was a co-ed institution with all the regular activities offered by most other camps–sports, arts and crafts, 3 squares a day (more about the meal experience later), swimming and other water activities in the Salmon River, night-time programs (co-ed!), bunk beds, remote showers, friends and mail call. On a day with nice weather we might elect to go on a nature walk (“tiyul teva”) in the woods or perhaps hike into the nearby town of Moodus and maybe get some treats not sold in the canteen. 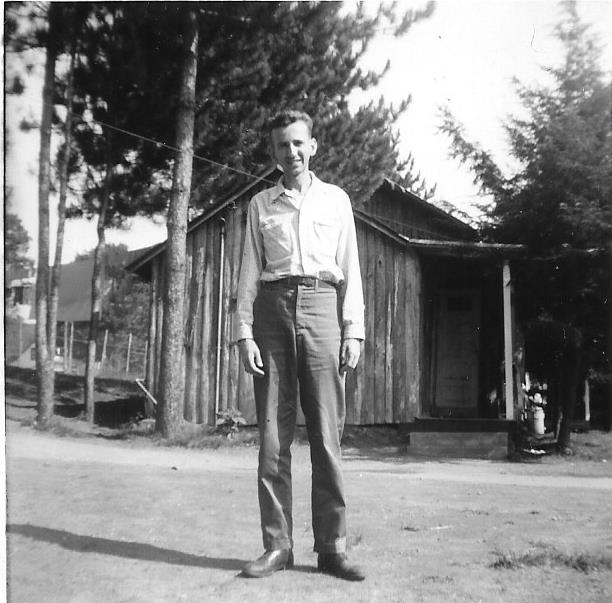 Saul Wachs, then the division head of “Aydah Aleph”, the youngest camper grouping, standing in front of one of our rustic bunks. Today Saul is the Rosaline B. Feinstein Professor of Education and Liturgy and Chair of the Education Department at Gratz College. Dr. Wachs is also the Director of the Ed.D. program.

The meal setting was familiar–10 kids sitting around a table, eating as much as they wanted. But what followed the meal was something completely different, and something that I never experienced. Not only did a designated camper say the “berkat hamazone” (grace after meals), but there followed the expected “announcements”–IN HEBREW! I came to miraculously understand those announcements after a very short time.

During the day we did morning prayers (“shacharit”), we played sports, did some arts and crafts, and had classes—yes, classes (“keetot”) in Hebrew! On Friday nights, and Saturday mornings, we dressed in our freshly laundered and starched “white ducks” and had religious services. On Saturday nights there was “havdalah” around the swimming pool.

It’s hard to believe that I chose to return to Camp Ramah again and again–5 summers in all, including the last spent in Israel, when I was 17. I did this all voluntarily and happily. Those summers were great, memorable and truly life-changing. To this day (I am 70) I am somewhat fluent in Hebrew. I made some great friendships and cherish the time that I spent at Camp Ramah.